14 July, 2021 Comments Off on Evidence of Impact of Comprehensive Sexual Education on Youth Ability to Protect Themselves from Gender-Based and Sexual Violence 'Trokitja' Center,'Yes' Youth Center,Aulona Center,IPPF,News,Publications zNJBMyJz7D 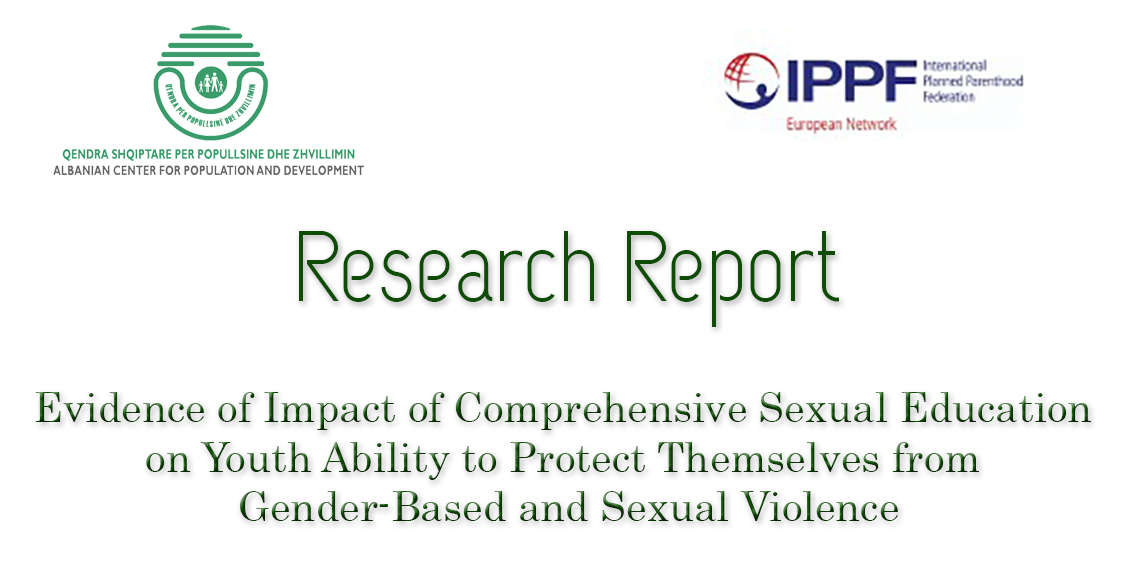 The aim of this research is to gather evidences on the impact of the comprehensive sexual education, in particular to evaluate whether the intervention has helped young people to increase their knowledge and skills in protecting themselves from gender-based and sexual violence. The study was conducted with youths of 10th and 11th class and the teachers of “Myslym Keta” school. The data were gathered before and after the intervention. A comparison was made between the intervention group (10th class) and comparison group (11th class) in the pre-intervention and post-intervention phase. The key research questions that guided this research were designed to help the researchers to explore the knowledge, attitudes and practices of adolescents regarding their sexuality.

A special emphasis was given to the exploration of the support that the school staff provides in relation to this topic, as well as what are the resources that the teenagers use to learn about sexual and reproductive health. The results of the research show that the majority of the participants find it easier to communicate with mother for important topics rather than with father and/or teacher. The overall post-intervention data analysis in particular amongst the intervention group shows that there are changes in communication with parents and teachers before and after the intervention. In most cases the change is positive, indicating that the intervention has helped teenagers to have more open communication with father and mother, as well as with the teachers on topics that are important to them.

More has to be done in this regard, not with teenagers only but also with parents and teachers, in order to improve the whole communication environment for youths to speak up on what concerns them. Regarding the level of concern that teenagers felt for certain situations that include sexual and physical violence; sexual and reproductive health issues such as HIV/AIDS, discrimination based on race, ethnicity and sexual orientation, gender inequality and sexual harassment in school environment, etc., the mean score for each of the questions in the pre-intervention phase ranged from 1.70- 1.93 which indicates a very high concern on each situation.

While after the intervention the mean score per each-item measured varies from 1.53 –1.77. This is an important finding because it shows that the adolescents are worried and concerned at high levels regarding sexual and physical violence, sexually transmitted diseases, discrimination gender inequality as well as sexual harassment in the school environment, that in turn affect their overall wellbeing. It remains to be investigated further why such high level of concern amongst pupils as it not the scope of this evaluation. However, we can assume that it is related to the information and knowledge they have received, because after the intervention students were slightly less concerned about such situations because they were supplied with knowledge and skills how to prevent SGBV and, how to address and report it when it happens.